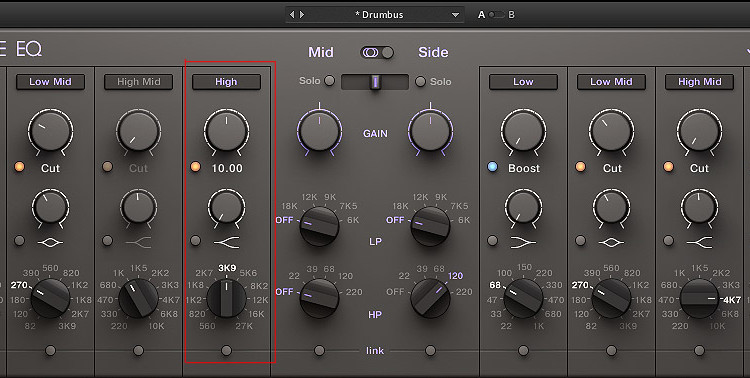 Whilst mixing a song today I realised that my vocal track was being obscured by the cymbals from the drums. I had been paying attention and checking that the vocal was audible the whole way through the song and was finding that in the upper midrange there was quite a lot of overlap.

Solution: I used an equaliser in mid\side mode to remove the mid\high frequencies from the mid channel of the drums only. The equaliser I used was the passive eq made by native instruments which is a software emulation of a Manley Massive Passive. I put a high shelf cut of about 10db at 3kHz on the mid channel only. This is quite a big cut and a little more than I would normally like to make.. but it sounded good so I went with it. See the image below for the settings I used.

Soloing the drums you can hear the higher frequencies dip in the centre of the stereo field, just enough to give the vocal a nice ‘hole’ to sit in. The side channel of the drums still had the high frequency information and I was happy with the separation of the two tracks!

Take a listen to the before and after so you can hear the difference.

Hopefully you can hear the difference even with the Soundcloud compression. You can hear the finished track here: https://www.soundcloud.com/yorkshire_bass_player/a-long-way-out-of-here